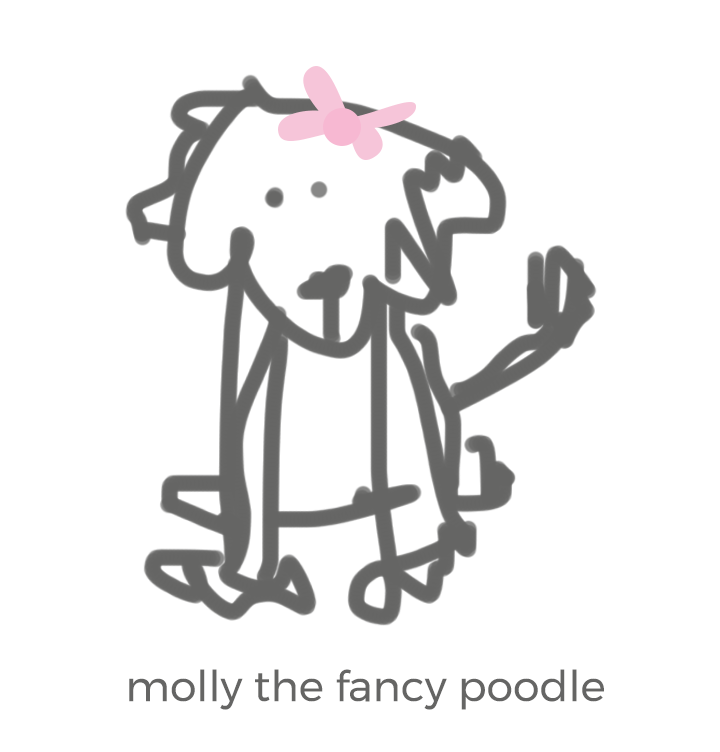 I would like you to meet Molly the Fancy Poodle.

If Molly the poodle looks a little rough around the edges for a very fancy poodle, it’s because she was very roughly sketched in Photoshop using my built-in laptop mousepad.

Have you ever tried drawing in Photoshop with nothing but the mousepad? It’s like trying to sign your name on one of those card-slidey-thing-machines they have at stores when you checkout…except you don’t even get a pen. There’s zero control with a laptop mousepad.

While I suppose I could have used my iPad + Apple Pencil + Procreate, I actually really rather like Molly the Fancy poodle just as she is. I did cheat a little though, I used the shape tool to make the center of her bow a perfect circle. It’s funny but I think that perfect circle actually is the worst part of the drawing.

Molly is not like our not-so-fancy labradoodle Cocoa. Cocoa is crazy. She is not refined or dignified in any way. She likes to bark at EVERYTHING. Everybody on our street knows her name. (That’s not a good thing!)

Here is Cocoa at the beach with sand all over her mouth:

Cocoa co-stars in my husband’s videos on his YouTube channel. Ray has tried letting her run the camera a few times but she’s not very good at that.

I very much like making badly drawn illustrations. And fun plays on words. Molly is actually a Doodle, and Cocoa is half poodle anyways.

And I’m sure you’ll see more of Cocoa too, she’s crazy.