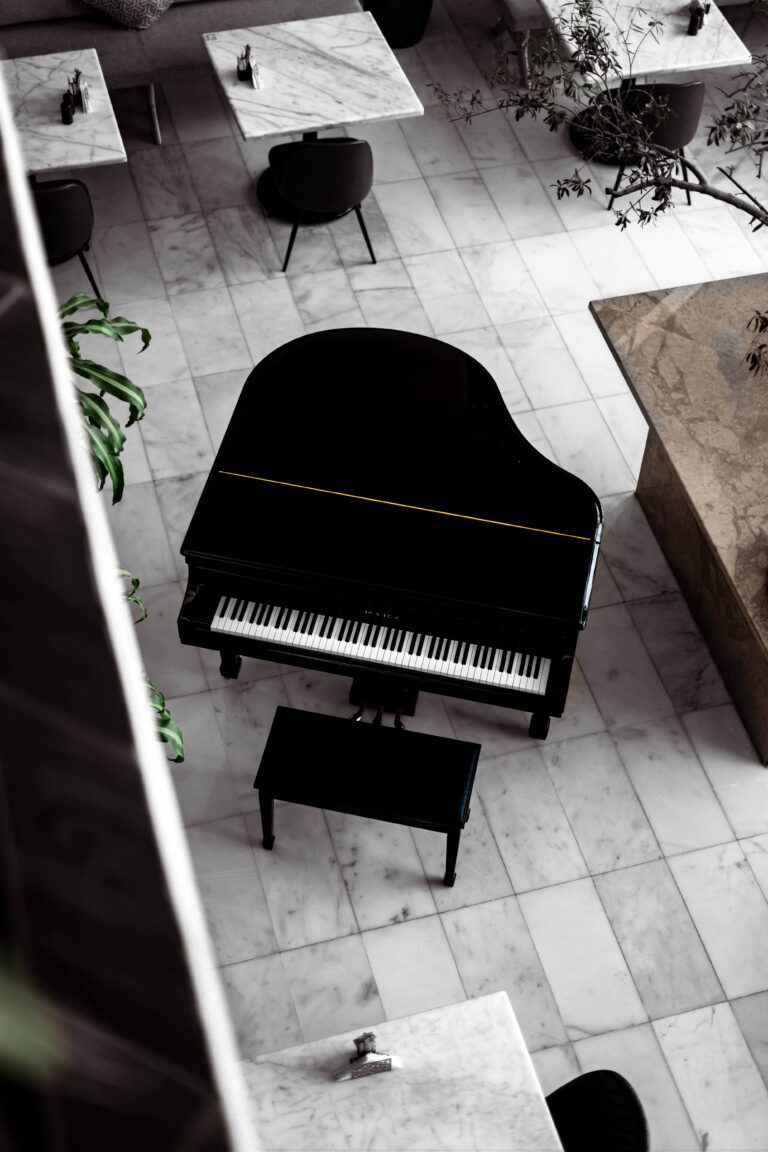 Grocery shopping usually makes me angry. From the traffic in the parking lot, to being reminded as to how much food costs and it’s probably not even healthy, to the long checkout lines, to the disheveled and distressed looking shoppers – it rarely leaves me in a good mood.

Yesterday though, was different.

I was in a good mood before we even walked into the door of our local Giant Eagle store. I had somehow scored one of the limited parking spots in the shade (always a plus in the middle of the afternoon in July!) and as we started getting closer to the entrance I could hear happy piano music playing.

Now, our Giant Eagle has had a piano in the store ever since it first opened a few months ago, so hearing the music wasn’t a huge surprise. The piano is one of those beautiful grand pianos that plays music by itself.

Complete with ropes around it and no touch signs, every time I saw it I was always a little sad that there you had a big, beautiful piano that no one was allowed to play. (I’ve always felt that way anytime I see one of those pianos, common at a lot of the UPMC hospitals in the Pittsburgh area also) Why have such a beautiful piano if no one is allowed to play it?

But as we got closer, I noticed right away the piano music was different from what was normally playing. It had something special to it that the music normally playing usually doesn’t – it had feeling.

It didn’t sound like a robot piano playing all the right keys as the melody was written – it sounded like a real live human being! And so, when I glanced over, I was shocked and delighted to see one of the Giant Eagle employees really playing the piano! And he was GOOD at it!

Judging by the way the man was dressed, I would guess he must work in the hot foods or meat department of the grocery store, though the sound was of the quality you would expect at a formal concert performance. It really was an incredible sight to see and hear!

And, as the saying goes, music soothes the savage beast – everyone at the store seemed unusually happy and friendly. I chatted with other customers in the store while shopping – usually uncommon because everyone is always in such a hurry and horrific mood while grocery shopping. People seemed to slow down and feel at ease in a usually hostile and hectic environment. No one was running you over with their cart.

There’s a lot of interesting lessons you can learn from a piano in a grocery store:

It’s okay to do the unexpected:

Most of us don’t expect a grand piano concert in the middle of a grocery store, nor would you expect someone who would normally be cooking or packaging food to be playing it. So often we get caught up in doing things by the book – we miss on an opportunity to do something amazing.

Everyone’s Got a Talent:

People can surprise you with what they are capable of doing. So often so many people discount people as just another person in a crowd or perceive someone as being unimportant – yet just about everyone has a gift and the ability to change the world to a better place, no matter how small it may be.

Would you expect someone behind the counter of the meat department at a grocery store to play concert piano? I hope you would.

We Need to Slow Down:

Life is always busy, busy, busy. We get so busy doing things, we actually do a lot of nothing.

The piano music helped slow down the pace of a usually hectic environment. It made you look at things and think of things in different ways.

If you were in the store yesterday, you weren’t just shopping – you were experiencing the moment.

We Need the Human Touch:

The player piano is nice by itself – but when someone sits down and plays, it’s a lot different. It has feeling, it has emotion – it reminds you in life that technology can’t replace human interaction. So many businesses forget that it’s people that make the difference.

It breaks my heart to see a grand piano playing itself. How many people would LOVE to be able to afford and play a grand piano, and here is some major bazillion dollar company showing off they have one but they aren’t willing to let just anybody actually play it?

The Ordinary can be Extraordinary:

Everyone goes grocery shopping. It’s a routine, ordinary, everyday thing we do all the time. Most of the time we forget about it, but it doesn’t have to be that way. You can take something boring and mundane and make it into something special.

Does your grocery store have a piano? What are you going to do that’s unexpected today?