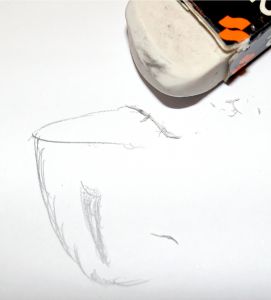 One of the hard things about being a writer, artist, musician, or any type of person who produces anything for that matter, is knowing when and how, and what to edit.

If you’ve ever tried to write a paper, or a book, or even maybe a short article, it’s all too tempting to go through what you’ve written and start editing it as you go. Maybe you’ll go back to read what you wrote and change some words, cut and paste a sentence, add some text here or there.

While it seems like editing would make your work better – sometimes it can make it worse.

Being Real, Raw, and Yourself is the In Thing These Days

One of the reasons reality TV is popular is because it is supposed to be an unedited view of life. You see live people going through the regular steps of life. There’s no second take to change the words that come out of someone’s mouth or undo the actions that were done.

What’s so fascinating about watching someone’s regular daily life? Not really anything, except knowing that whatever you are seeing is real. It’s not scripted or rehearsed – it’s real.

My husband was in a band for several years that could have been the best band to ever have graced the world. (And I’m not just saying that – they really had some amazing music!) But it never came to fruition because they edited too much.

They were constantly worried about having the right gear or rewriting the same song over and over again trying to reach perfection. Instead of going on to sell 300 million worldwide copies of their music, they just kept getting stuck in the rut of constant editing. They never made a record or sold even a single mp3 download before the band finally broke up.

The sad and ironic part of this? It’s their completely raw, unedited tracks that I’ve listened to that I like the best.

You Can’t Be Perfect, Being Yourself is The Next Best Thing

Nobody is perfect, and they never will be. And while we all know that, we still strive to be perfect even though it’s impossible. While yes, you should be the best you can be, if you spend too much time trying to be perfect, you won’t be anything at all.
It’s always better to do something, anything – even if completely imperfect, than to let your talent go to waste.

Some tips to help you stop self editing all the time:

Give Yourself a Time Limit:

This really helps me A LOT because I could spend two hours editing a photo in Photoshop or mulling over the line spacing and wording in something I write. If I give myself a time limit, I work a lot more efficiently.

Many years of working in horrible customer service jobs has taught me to never take criticism personally.

If you make a mistake just say “Oh! Glad you noticed that!” And then fix it.

Sure, you should work with care and try to avoid making mistakes – but everyone makes mistakes. Most mistakes are learning opportunities anyways.

Don’t Ask for an Opinion When You Know What You Have is Right:

I love my hubby and I trust his opinion and judgement on a lot of things. But often times, if I’m working on a project, I’ll ask him what he thinks – and it ends up making me change stuff that before was just fine the way it was. There’s a lot of “noise” out there – sometimes just listening to your first instinct is the way to go.

Sure, some things need to be edited, and when they are edited they might turn out better – but sometimes they turn out worse. And sometimes, that time spent editing, could be better spent creating.

When I write, I try not to read back and change what I write. If I record something, I don’t listen to it – otherwise I’m sure I’ll end up trying to redo it over and over again, and none of the later tries will be any better than the first one!

If something is fine the way it is, then leave it alone! It’s hard to make something “better” if it’s already good!

Just about any skill can be acquired with practice or training. If you know what you’re not very good at, either enlist someone better at it to do it for you, or do what you need to do to become better at it. Don’t waste time worrying that you’re not good enough to do something – take the time to improve your skills instead.

Above all, be real. Be you. Don’t worry about what anyone thinks.